The Beat Goes On

The great American road trip – it’s an adventure unlike other in the world. And when you consider all the iconic places you can go just within the U.S., the list of sights, sounds, and flavors is nearly endless.

Growing up, my family would pack into our minivan every summer for a cross-country getaway, making stops along winding backroads to visit quirky roadside attractions and fill up on ice cream. I’ve never forgotten those road trips and what a blast they were. They made such an impression that they still inspire my own family’s journeys on the road, including our most recent excursion which had us dancing all the way from Nashville to Memphis to New Orleans on a musical odyssey. Of course, where there’s great music, you know there’s always great food!

For country music lovers, there’s no other place to be than Nashville, also known as Music City. After all, it’s not only the beating heart of country music, it’s also become quite a magnet for all types of musicians and music ranging from pop and R&B to rock and bluegrass. Most importantly, this is where so many of America’s most storied musical artists recorded and launched their start.

Nashville is home of the iconic Grand Ole Opry, so plan spend a Friday or Saturday night here taking in some of the brightest new stars and legends of country music on the Opry’s classic stage. The Opry was started in 1925 when an announcer on a Nashville radio station introduced fiddle player Uncle Jimmy Thompson as the first performer on a new show called “The WSM Barn Dance.” 80 years later, the show is still going strong thanks to an ever-increasing fan base.

When it comes to pairing great music with equally great food in Nashville, look no further than Pucketts Grocery and Live Music Venue. Along with an eclectic assortment of tables and chairs, and a diverse clientele, this Nashville institution serves a dining experience unlike any other while hosting live, local music with a huge side of Southern hospitality. On the menu are Southern favorites such as a fried green tomato BLT, slow-cooked BBQ, shrimp and grits, and more.

If you want maximize your time in Music City, consider staying a night or two. This will allow you plenty of time to experience all of Nashville’s highlights without being rushed. We’re big fans of the boutique Noelle Hotel Nashville, located downtown. This experiential hotel and creative gathering place incorporates an authentic and fun art-driven experience curated by leaders of Nashville’s thriving creative community.

Leaving Nashville, it’s time to head southwest on Interstate 40 to Memphis where along the way you can make a detour at the Loretta Lynn Ranch to experience The Coal Miner’s Daughter Museum. This 18,000-square-foot museum amasses a huge collection of personal memorabilia and awards from Loretta’s expansive career in country music along with mementos from her many beloved friends in entertainment. 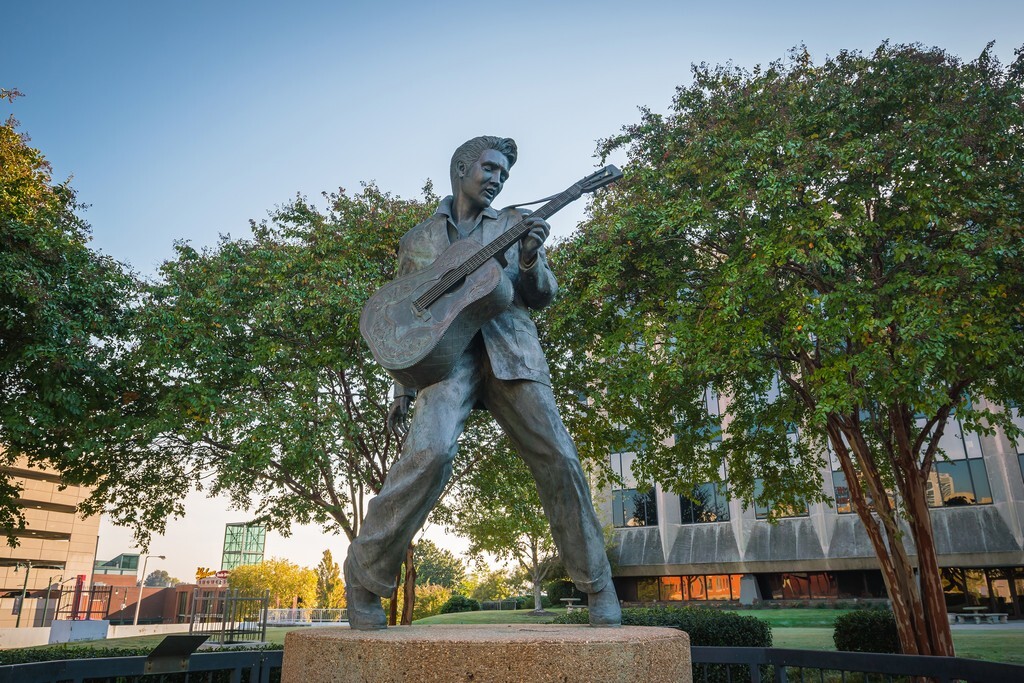 Continuing on for about a three-hour drive you’ll arrive at the sprawling estate of Graceland, the home to none other than the King of Rock and Roll himself, Elvis. No visit to Memphis would be complete without a stopover at Elvis Presley’s Graceland. This iconic rock and roll estate was purchased by 22-year-old Elvis on March 19, 1959 for $102,500 and is now preserved to share with the world and to help maintain Elvis’ legacy. On your tour of Graceland you’ll see the famous Jungle Room, his airplanes, and loads of memorabilia and kitsch.

Dubbed the Home of the Blues and Birthplace of Rock 'n Roll, the city of Memphis offers a rocking good time to all with an eclectic array of live music venues and foodie hotspots. And the best way to understand the importance of Memphis’ contribution to modern music is to begin your tour of the city at Sun Studio where music royalty like Jerry Lee Lewis, Johnny Cash, Roy Orbison, and Elvis first recorded. Started in 1950 by Sam Phillips, and located just off vibrant Beale Street in downtown Memphis, Sun Studio helped give many blues and R&B performers their big shot. Sam’s assistant, Marion Keisker, was the first to see, hear, and record Elvis’s first track.

When you’re in town, make sure to stop in at Lafayette’s Music Room. During the 1970s, Lafayette’s was the place to see live shows. The establishment helped launch the careers of music superstars Billy Joel, KISS, and Barry Manilow. Today, Lafayette’s Restaurant and Bar boasts live bands seven nights a week and serves a delectable menu inspired by Southern cuisine.

After a good night’s rest in Memphis, be sure to get up early, grab some breakfast at Elwood’s Shack, and head directly south on I-55 for about six hours. When you arrive at New Orleans’, plan to check into the exquisite JW Marriott New Orleans, set in the historic French Quarter. As a guest you’ll experience nothing less than superb service, upscale amenities, and modern luxury. The hotel is also conveniently located with easy access to Harrah's Casino, the House of Blues, and the Audubon Aquarium of the Americas. When the weather’s warm, be sure to take a dip in the hotel’s rooftop saltwater pool!

After checking in, hit up the French Quarter to grab some lunch and a cool drink (Deanie’s and Johnny’s Po-Boys are a couple of personal favorites). Trust me, you’ll need the energy before you start exploring the town on foot. 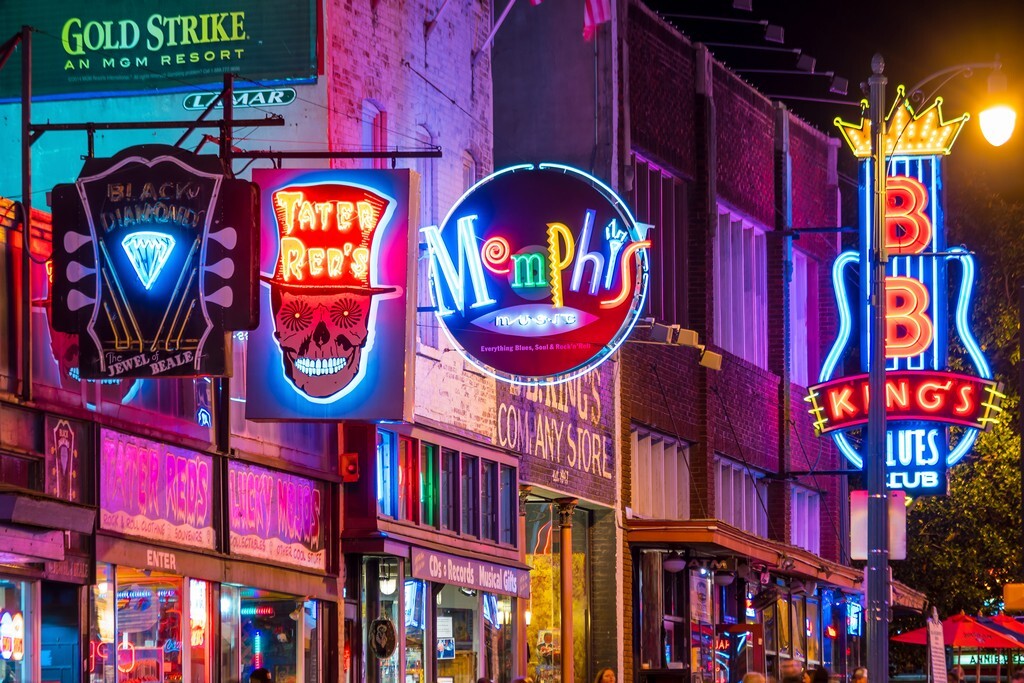 Once you start soaking up the French Quarter’s the eccentric, lively, and at times, bawdy fun atmosphere, you’ll realize there’s no other place on Earth quite like it. Things really get hopping here in the evening and keep on going until the early morning hours.

New Orleans is a city that plays to the senses from its Jazz Festival to Mardi Gras and many other music festivals too numerous to list. Jazz, brass bands, and soul music can be heard everywhere from street performances to giant concert halls to small venues like the revered Preservation Hall, home to the legendary Preservation Hall Jazz Band.

Established in 1961, Preservation Hall has become a haven for fans of traditional jazz with its unique old-school decor and intoxicating ambiance. Situated in the heart of the French Quarter on St. Peter Street, Preservation Hall is an intimate venue with concerts over 350 nights a year.

Another local spot to catch some of the best live musical performances is the world famous Maple Leaf Bar on Oak Street in Uptown New Orleans. Here you can catch blues, funk, R&B, rock, zydeco, jazz, jam bands, and any combination thereof. Unannounced drop in celebrity artists are not uncommon (Bruce Springsteen once dropped in to jam with The Iguanas).

For a more laidback music scene, take a walk down Frenchmen Street and explore in the vibrant blocks of cafes, music clubs, and restaurants that include Snug Harbor, d.b.a. and the Spotted Cat. For an off-beat adventure, the Singing Oak is a peaceful spot with coordinated melodies from the beautiful wind chimes that hang from the giant oak located in the heart of City Park. The chimes are tuned just right for a harmonious effect that is a relaxing tinkling symphony.

And because Sunday brunch is itself an institution in the Big Easy, consider making a trip to famed Arnaud’s. Sunday brunch at Arnaud’s comes complete with a delicious Creole menu while a traveling jazz trio takes requests. For the perfect ending, order the bananas foster and watch as it is flambéed tableside. Yum!